Death in the Pyramid of Shadows 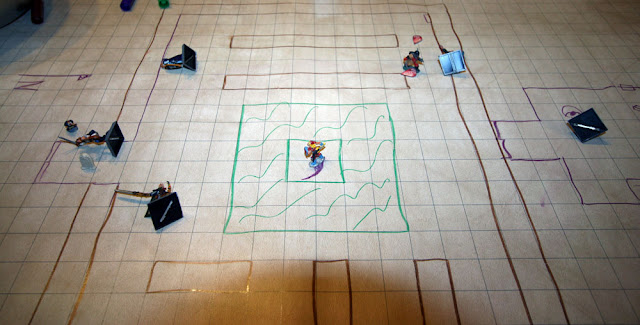 Shortly after midnight this morning, the adventuring party known as the Unusual Suspects met its doom in the library of the Pyramid of Shadows.

Having already survived a pit of corpses, fiendish two-headed monsters and giant rats, the stalwart compatriots were eager to track down their adversary, a wizard who held the only means of escape from the labyrinthine, other-dimensional pyramid. Aided by an elf sorceress imprisoned in an orb, the party made their way to the pyramid's library, guessing that there they might find clues as to the evil wizards location.

But alas! The brave souls were ambushed by a quintet of immortals, ageless beings with horrific psychic powers, servants of the mad god Vecna. Storms of psychic arrows rained down upon the hapless adventurers, dazing them, slowing their reflexes and leaving them vulnerable to further assaults.

Lady luck also played a role in the grim fate of the Unusual Suspects. Even Jeff's brand new dice, purchased in desperation after too many polyhedral disasters, abandoned the elf ranger, and he was the first to fall. Mike's gnome illusionist, sensing that only unorthodox solutions offered any hope of escape, mounted the ladder to the library's second level and opened the door to another chamber, where he spied, miraculously, the image of his god. Head bowed, he prayed to the stone idol, only to be struck down by a lethal trap.

Meanwhile, Audrey's paladin, Pete's tiefling fire-caster and my melodious bard attempted to hold off the assault of the immortals. Indeed, Audrey managed to murder one of the immortals, while Pete's magic missiles whittled down two others to their doom. But our final foe laid us all low - first my bard, then the paladin, and finally the mage. In the end, only Scott's character escaped - mainly because Scott himself couldn't make it over to Steve and Audrey's for the game. His character missed the massacre.

As games go, "losing" in Dungeons and Dragons can be relatively tough; we had, after all, invested three years in these characters, only to see them butchered. But as any lover of games will tell you, the possibility of losing is what makes success sweet. If we'd been smarter or luckier, we might have survived this encounter, but instead we'll have to continue with new characters, new back stories and new motivations. It's almost like transitioning from season one to season two of a fantasy television series, with nearly all the cast and characters replaced to revitalize the show.

When we created our backup characters years ago, I decided to play against type and crafted a musclebound, relatively dimwitted barbarian named Anvil. It'll be interesting to see how he fares when Scott's character recruits him to avenge his fallen comrades.
Posted by Earl J. Woods at 6:20 pm

Illusionist?! I'm a blleedin' warlock! Or at least I was.