The Depths of Space 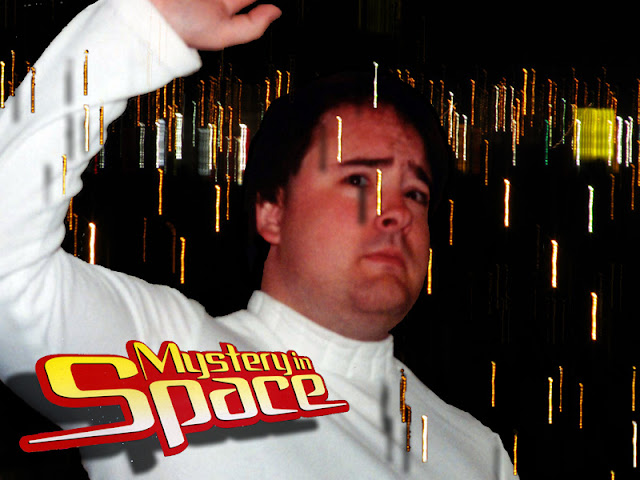 Only now, after years of practise, am I beginning to develop a hint of understanding of depth and perspective in art. This image is silly, but it serves as an important learning tool in my quest to come to grips with perspective. As you can see, I've attempted to semi-realistically place myself in the middle of a rain of light, with some of the rain in the background and other falling droplets in the foreground, as if they're in front of me, or closer to the reader. To accomplish this, I selected several of the bars of light and then transformed them into a separate layer, which I copied a couple of times. Then I pasted my Earl cutout into the image, placing that element between the background layer and the raindrop layers. Using blending options, I added drop shadows to the raindrops. The tricky part was trying to determine the distance between my body and the drops; that would determine where the shadows should fall. I used the same trick with the "Mystery in Space" logo. While the effect isn't polished, I think it's a stumbling, shambling step forward.
Posted by Earl J. Woods at 8:23 pm

Hey Earl, I lime the image here, my initial thought was "Hey that is neat". The light drops.with the shadowing work to my eyes anyways.

Eyeballing perspective takes practise. Sometimes you'll get used to an eyeball perspective you think works great only to discover hours, days, months, or years later that it was all wrong.

There are two easy tricks you can use in Photoshop:

2) What the high-end manga artists do is render perspective cubes around everything. You'll need to establish vanishing points. Typically, the horizon will live around the eye line of your main subject. For a high angle shot (cam looks down), the horizon rises, and for a low angle (cam looks up) shot it sinks. The vanishing point often is outside the picture frame.

Rendering boxes in Photoshop is easy, since all you need to do is render a rectangle and then use Perspective and Skew to make it look right. I don't normally render a whole cube unless the character is heavily tortile through 3D space. If that's the case, I'll draw one big cube, and then smaller ones for arms, legs, hands, etc.

Mostly all you need is just the floor of the cube and perhaps the cieling. The feet (if visible) stand on the floor, and the head (if visible) touches the cieling. Once you see those, you can easily work the perspective. When you are ready to finish composition, just hide the guides before final publication. If you need to recheck them, you can always unhide them later.

Now delete the guides you just render'd and drew,
Thenst nobody will see them: nobody but you.