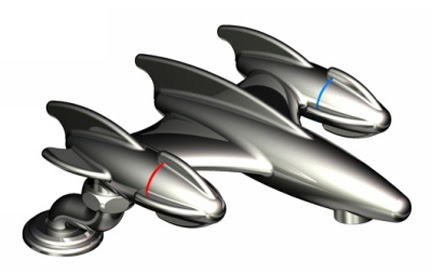 I first spotted this amazing faucet in a movie or television show some years ago, and I was determined to find the make and model and purchase one for every bathtub and sink in the condo, even if I had to retrofit the sinks and tubs to make them work.

Imagine my shock when I discovered that these taps range from $2700 to $3200 each. For taps! I couldn't believe it. Is an affordable rocketship faucet too much to ask? Those price tags certainly signal "Taps" for my rocket taps ambitions.

I want these taps so much, so does my wife (maybe)
Is this too much to ask?
A set of Flash Gordon faucets
Is my hopeless task

But I think it's going to be a long long time
Before I have enough green to make these faucets mine
I'm running hot and cold for them oh, no no
Rocket Taps

Rocket Taps
The gleaming chrome and retro styling turns me on
Your fins promise bath adventures far from home
But you're so very expensive I can't believe
Rocket Taps...