Four Views of an Enigma 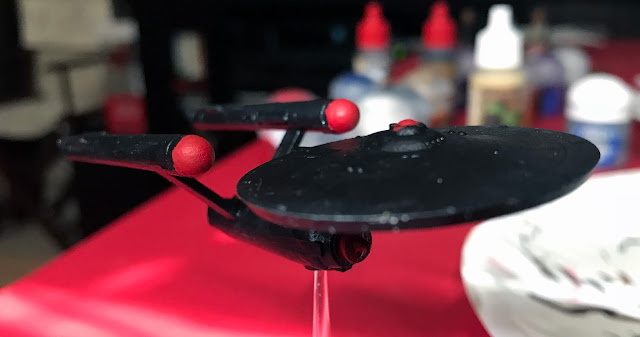 A few nights ago, I dreamed I'd painted one of my recently-ordered 3D-printed starships (meant for use with the miniatures game A Call to Arms: Starfleet) black with red highlights; in the dream, the ship was the NX-007, a black ops Section 31 starship. Today I painted it as shown in the dream. 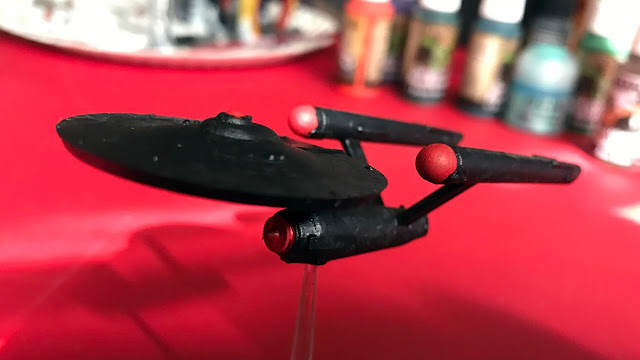 As you can see, my technique has improved a bit since the last time I painted starships, but it still needs work. 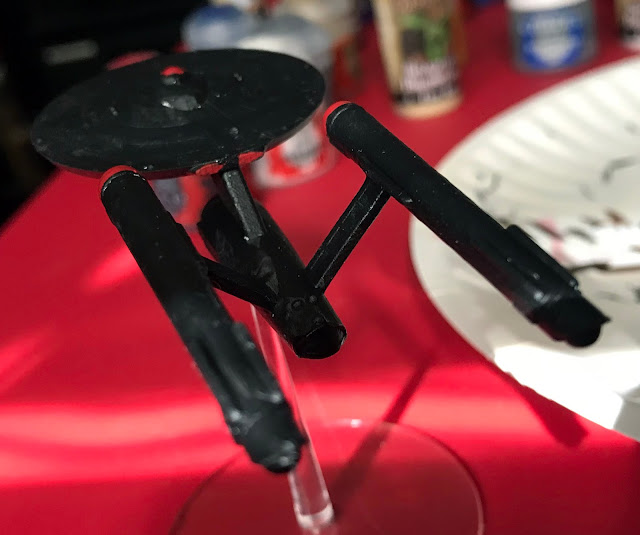 I think it looks nice and ominous. 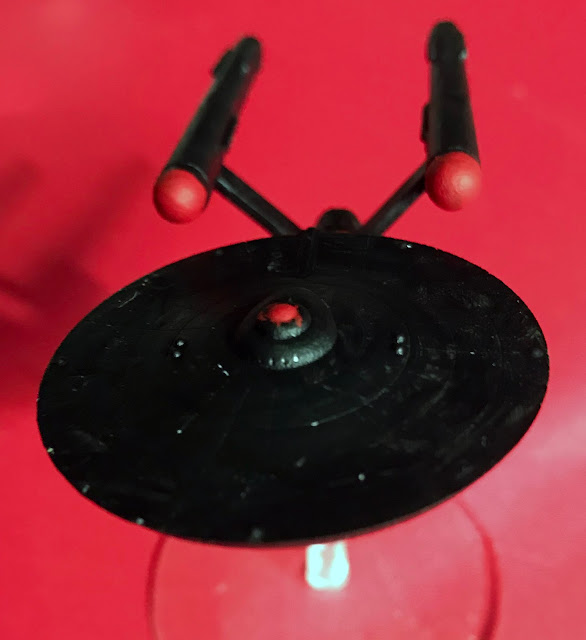 I like to imagine that the nefarious Section 31 will not include the requisite NX registry or ship name on the hull as they should, for plausible deniability. This also saves me trying to paint or draw tiny, tiny letters and numbers.

The ship didn't have a name in the dream, but I've considered Spectre, Bond, Mata Hari, LeCarre, and Fleming; Stephen suggested Nathan Hale, the famous American spy of the war of independence. However, I think I'll call it the Enigma, since all the other ships in my A Call to Arms: Starfleet fleet have names beginning with E.

Man, I totally underestimated just how much sleeker that design would look in black, nice work!

It’s a shame there is no way to bring out the saucer details without losing the depth of the blackness...well, asides from painstaking outlining each line in the thinnest possible.white line prior to tinting those all red or something equally ridiculous. Someone please develo nano-paint that we can program this way!

The big ship in Star Trek Into Darkness was black. Well, black-ish. If I were painting a black ship, I'd derive some cues from that.

I think Earl did a fine job. Pure black isn't an easy paint to work with, it soaks up light and you need light for visual cues - that's the idea for a mystery ship. I would have mixed Paine's Grey, which is a perceptual replacement for black paint. Maybe used matte paint, since gloss blots out detail. Then painted in details, using just a dot of white or black in the mix to make variable panels or whatever. It would be a lot of work. At the end, cover the model in clear gloss if you want that effect.

There was an episode of STTNG where they make art using pre-programmed gizmos, isn't there? They just spray a beam and art comes out. I think it's the episode that convinces Data to try paint. I saw the cat Spot the Art Dept made for that show (Data valiantly paints this portrait) on gallery display in Seattle. It's far more hideous than on TV when you see it in person, stunningly evocative Ungood Art! I think I have a photo of it somewhere.