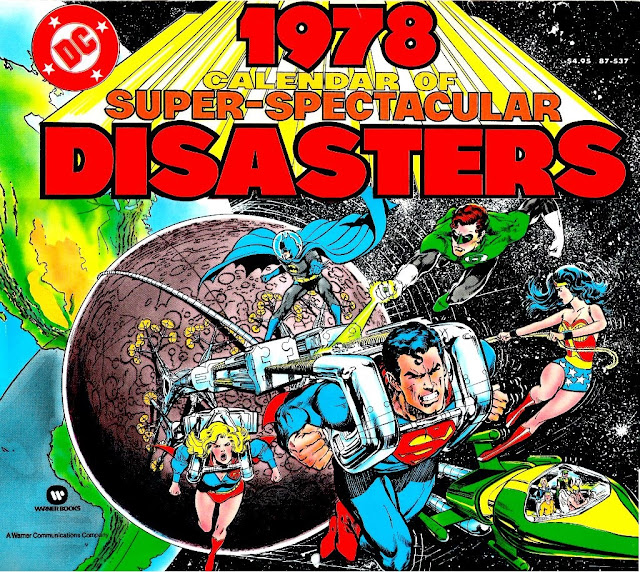 When I first saw this calendar sometime back in 1977, I'm sure my face fell in slack-jawed wonder. Some villain had knocked the moon out of its orbit, and only the Justice League (and Supergirl) could put it back in its rightful place! The concept is ludicrous, but the great Neal Adams somehow makes it work. Those kilometres-long harnesses bolted across the face of the moon are wonderful, and look at the strain on the faces of Superman and Supergirl. Adams totally sells it. Everyone has a role to play; presumably Green Lantern is either shoring up the harnesses so they don't snap, or helping push; possibly both. Wonder Woman is using her lasso to help arrest the Moon's fall, even though in this era she couldn't fly under her own power, so I'm not sure what's going on there. Compared to the titans putting all their godlike energy into the effort, Hawkman's Thanagarian police cruiser probably isn't adding much thrust to the package, but all for one and one for all. I suppose Aquaman, Green Arrow and Black Canary are on board to provide damage control if the ship blows some fuses.

As for Batman, well...thanks for coming out, Bruce, but standing there and yelling "Push! Harder!" can't be that helpful in this situation.
Posted by Earl J. Woods at 1:52 pm

Wow, I took a minute to look at this piece before reading your post, and you mirror my own thoughts almost exactly! Ludicrous, but well thought out, and stunningly depicted by one of my favourite artists.

Not sure what I would have suggested doing with Batman, besides possibly having him fight an alien or villain trying to sabotage the rigging, or maybe servicing some Wayne Technologies module in the harness. Mostly I am hurt that he is only wearing an enlarged bubble helmet to accommodate his ears, and not a more proprietary Bat-spacesuit.

I don't see any thrust coming from the Arrowplane.

Shouldn't Bruce be yelling "pull," instead?

That's Hawkman and Hawkgirl's spaceship, not the Arrowplane. You're right, though - Batman would be yelling "pull," not "push."

The article presented today article is decent, but if you want a really insightful look at what it took to put this scene together, every man, woman, and child in the known universe deserves to check this article out - the author is brilliant, and he just gets everything right. Truly something for the rest of us to strive towards:

Aaargh. The edit of "The article presented today article is decent..." should read:

"The article presented today is decent..."

I...suppose I could post at a Conservative site, Okie, though I doubt the sort of content I produce is of much interest to that particular audience.

Jeff: I'd forgotten I'd already posted about another similarly-themed Adams cover! And it even foreshadows this post. Wait, I meant to do that...

I envy you your ability to forget how many times you've seen Superman strapped to a moon or planet. Each one I've seen is permanently etched in my memory, taking up space that I could use for other things, like how to drive a stick shift, or what the Professor's real name was on Gilligan's Island.