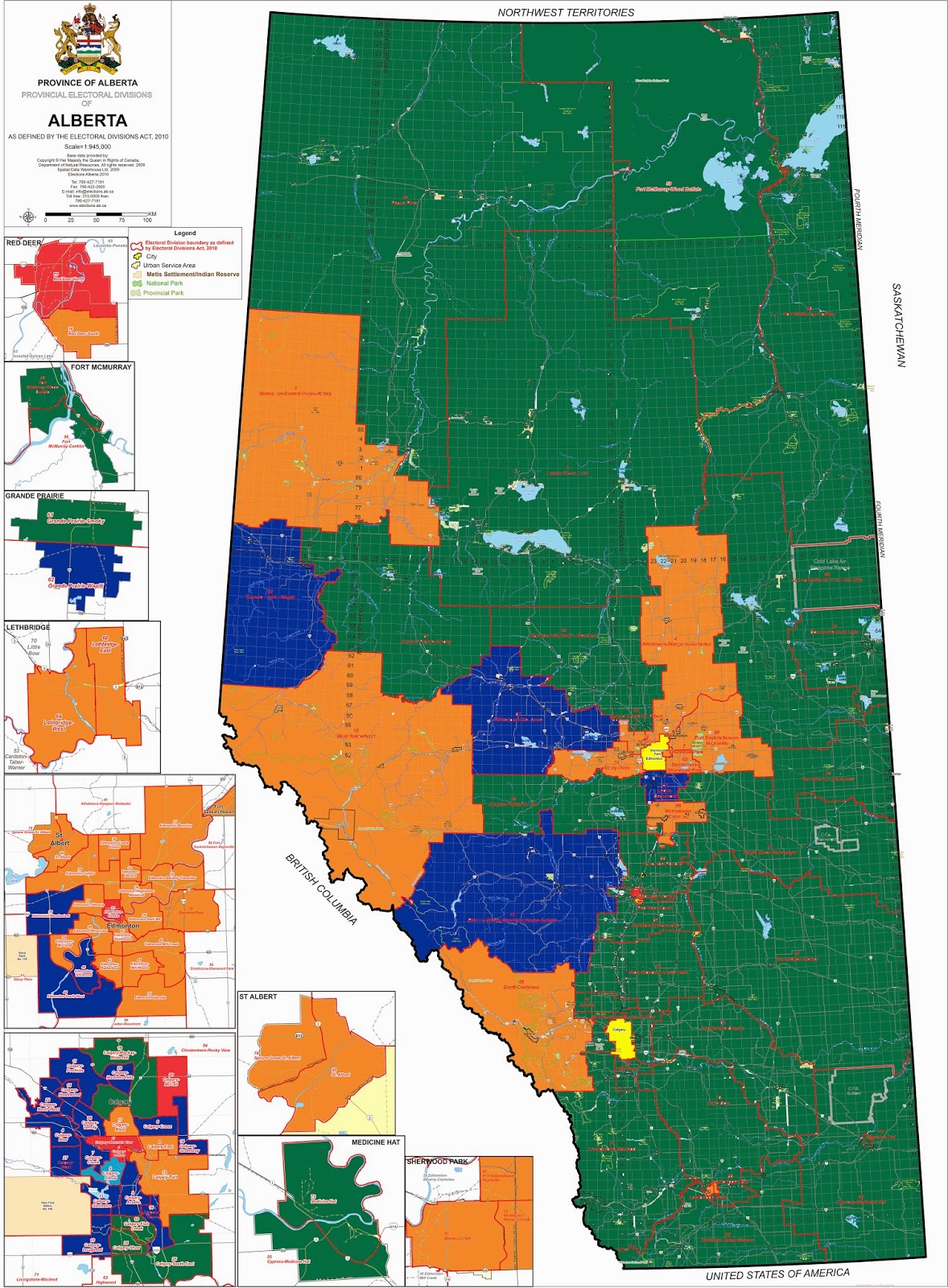 While part of me still believes that the polls must be wrong, they are at least consistent, giving the Wildrose and NDP an edge over the trailing Progressive Conservatives. It seems almost crazy to believe that Albertans might elect a government other than the PCs, but I suppose stranger things have happened in Alberta...if rarely.

In offering my second seat tally for Alberta's 2015 election, I'm also taking into account what I'm hearing from friends and family - and that is an exclusive determination to vote for anyone but the PCs, even from people that have voted Tory for decades. And finally, there is the failure of the Alberta Liberals to run a full slate of candidates, which leaves a substantial pool of supporters without Liberal candidates to vote for. If most of them decide to choose an NDP candidate as their next-best option, that could swing a few tight races.

This time around I reviewed each constituency before choosing a hypothetical winner and coloured in the map as I went. Green constituencies are Wildrose, orange NDP, Liberal red, blue PC and light blue Alberta Party. Even as I write this I have not as yet counted out the seats; I will do that right...now.

As you can see, in this scenario the Wildrosers take almost all of the rural seats and score a handful in Calgary. The New Democrats dominate Edmonton and snag a couple of relatively progressive rural seats. The PCs hang on to Calgary and keep a small number of their rural seats. And the Liberals, somewhat improbably, wind up back where they started.

Wow. What a mess that would be, huh? I suppose in this scenario the PCs and the Wildrose would merge in order to hang on to government, infuriating half the population. In reality, I'm probably being a little too kind to the progressive parties here; the Liberals could easily wind up with two or even zero seats, probably losing them to PCs, and the NDs are unlikely to pick up those rural seats in western Alberta; these are my surprise/sentimentality picks. In reality they'll probably go Wildrose.

It's pretty foolish of me to throw this silly analysis into the world before the leaders' debate, but it was a fun exercise. One more prediction to go!

If you witnessed the last BC provincial election, you would never put your trust in polls ever again, especially if you are NDP.