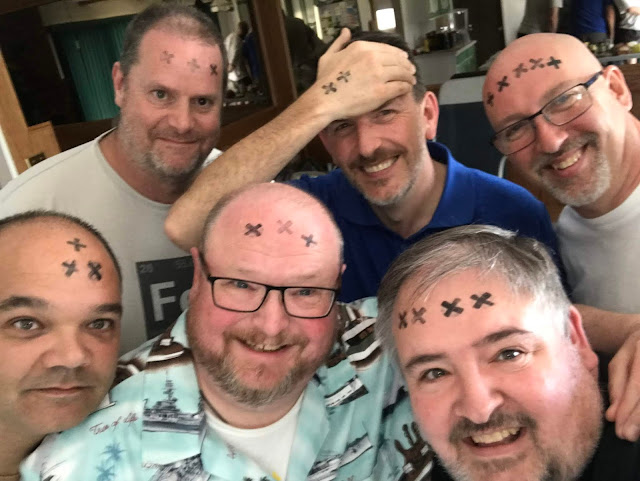 Our 13th annual Gaming & Guinness adventure began with a round of the messy and humiliating Trivia X, in which everyone wins except the first person to get five incorrect answers (and five xes stamped on the forehead). Island Mike and Scott hadn't shown up yet, so they escaped unscathed. 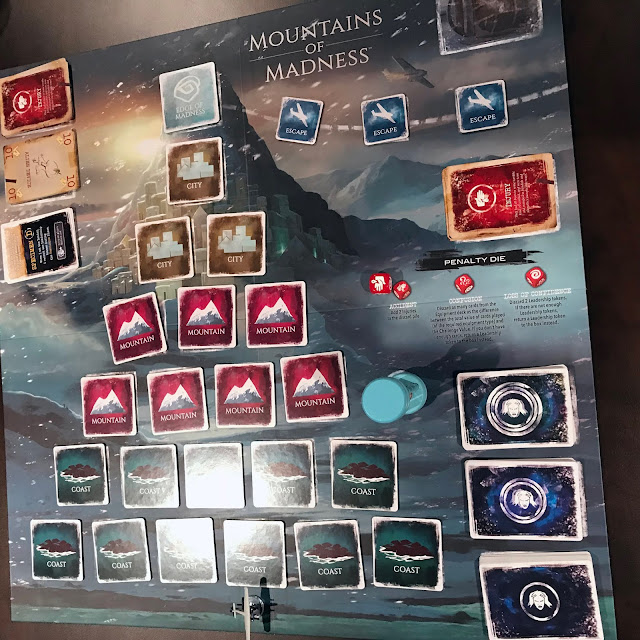 Wednesday night is an appetizer of sorts for the full-day gaming shenanigans to come, so we tend to choose games that take an hour or less to play, such as Mountains of Madness, a cooperative game that tests the very sanity of the players as they attempt to confront dread Cthulu without losing their sanity. 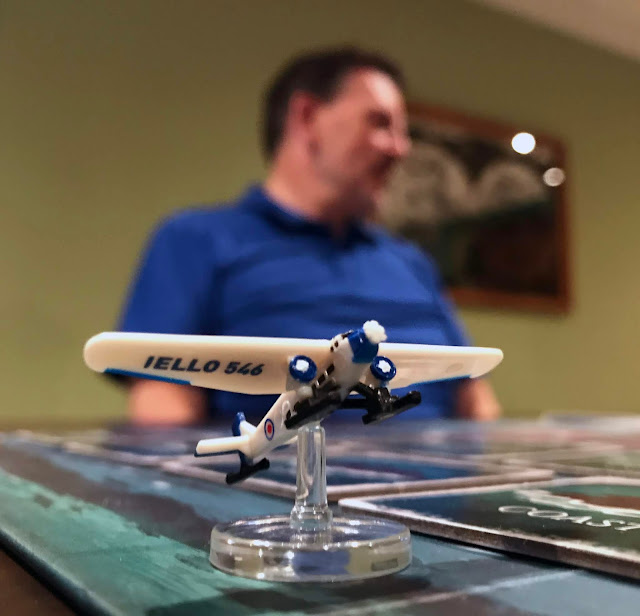 Each player has a secret madness card they must keep to themselves. During one phase of the game, every player has to act out their particular malady, while at the same time trying to collect the items that will let them progress up the mountain. 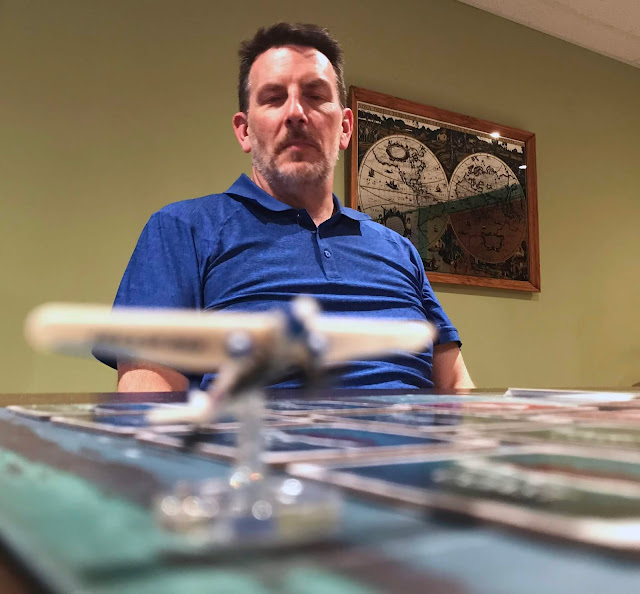 It can be quite a challenge, particularly for poor Rob, who at one point had to hold his cards over his head, limiting his ability to see them and use them effectively. 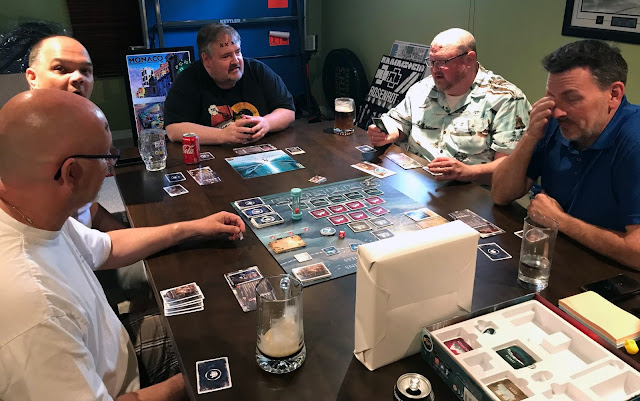 Of course, some of us still have those xes on our heads. But we're supposed to be insane in this game. In any event, we did not escape dread Cthulu. 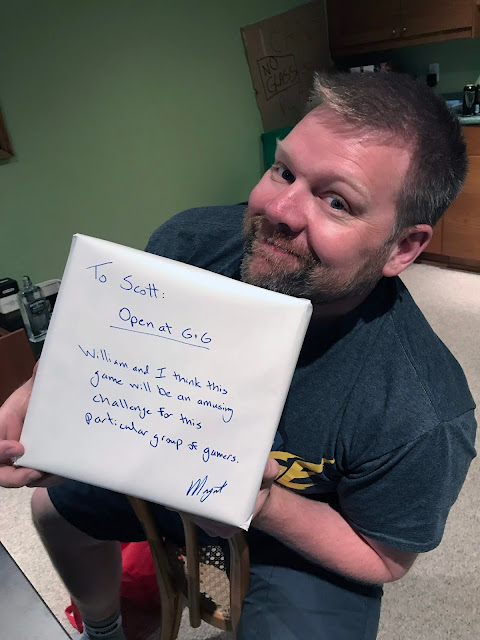 In a surprising first, Scott's wife Margaret sent over a surprise game for us to try, which turned out to be a fun, fast-paced tile-based cooperative racing/puzzle hybrid called Magic Maze. 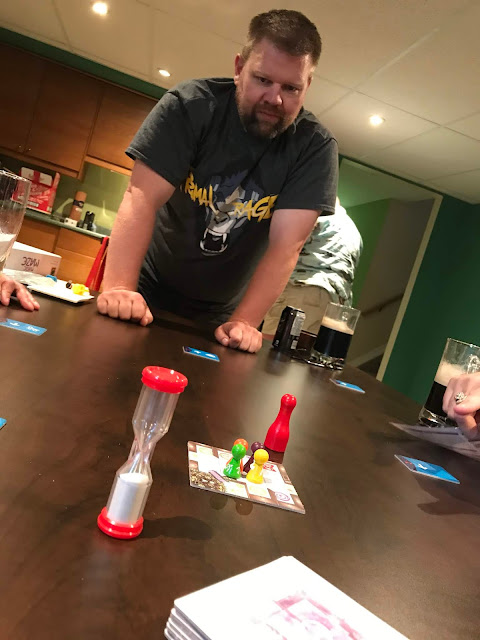 Moves are timed in Magic Maze, and each player can only make certain moves, so everyone has to coordinate their moves carefully to escape the maze. However, you're not allowed to talk to one another..!

Here are our meeples on the first tile, along with a couple of tops used for a drinking game. 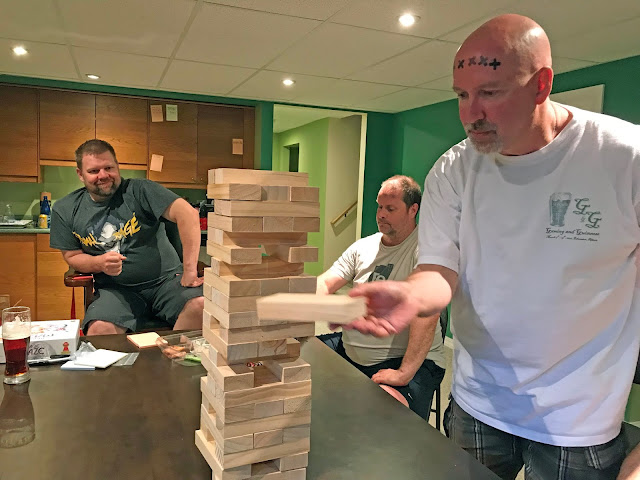 To my great surprise, I was the victor of the giant Jenga game. You win by being the last person not to send the tower crumbling down. It was a near thing.

Last year, Steve found some simple rules for medieval arena combat. We use his collection of old Dungeons & Dragons miniatures to compete in Old Miniature Deathmatch. 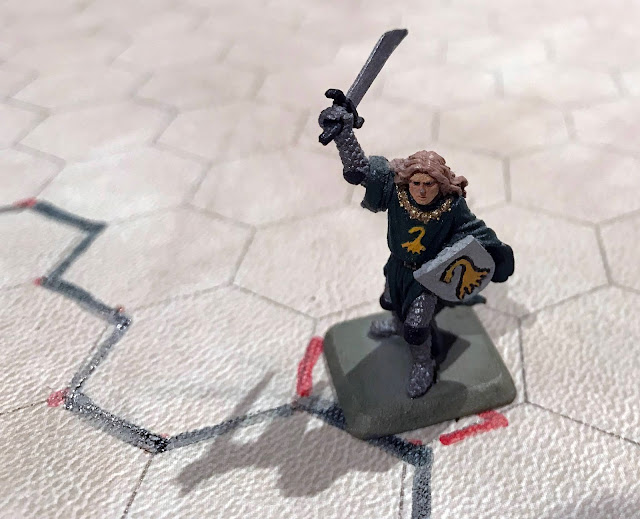 I chose this fellow and named him Stovion the Flamboyant. By "Flamboyant," I mean that I chose a rather craven playstyle this time around: I simply ran to and fro in the arena while everyone else killed each other, then I dove in to tackle the last remaining player, Stephen's monk. 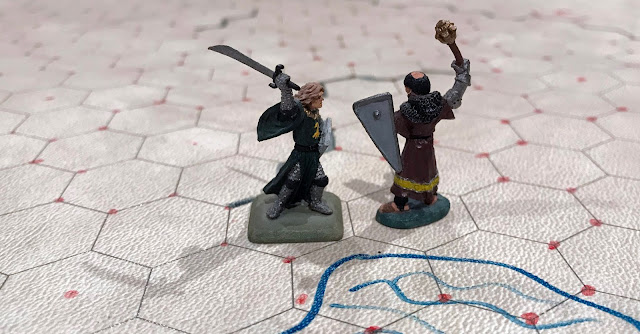 Karma being what it is, I was punished severely for my calumny; Steve's monk dispatched me handily, consigning me to second place (and the grave). 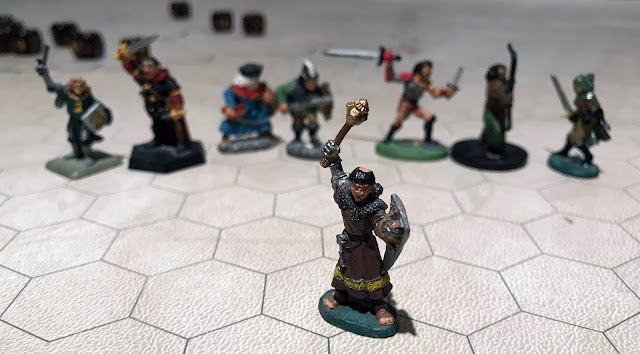 The victor and the vanquished. So ended Day One.

Way to go guys. In this crazy world with so many responsibilities and diversions pulling at us as we age it's pretty impressive you've managed to keep this going for so long. Definitely jealous!