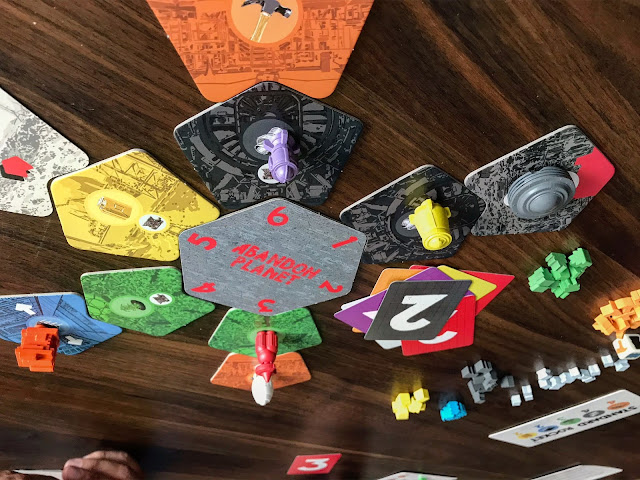 We began day three with Abandon Planet, in which players attempt to escape a doomed world before it's obliterated by an asteroid. No one person will ever have enough spaceship parts and supplies to escape, but neither are there enough resources for everyone. So players have to evaluate who has what, and teams quickly align before the final cataclysm. I was not one of the escapees. 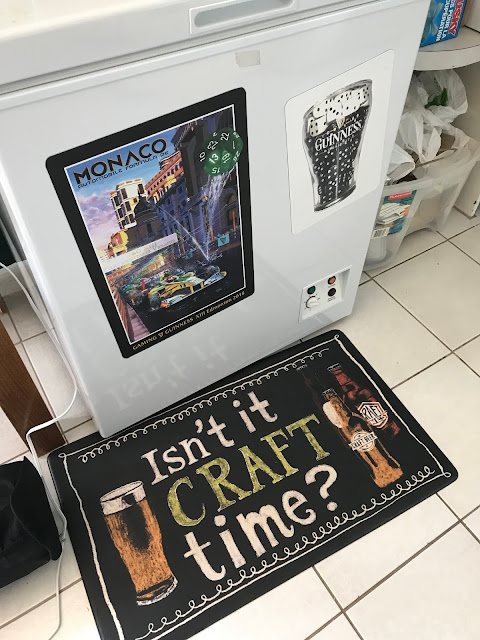 Here's our first glimpse at the official Gaming & Guinness XIII artwork, commissioned to the formidable Jeff Shyluk. It's in rather debased form here, on a car magnet thrown in for free by the printer. You'll get a better look at the art in my next post. 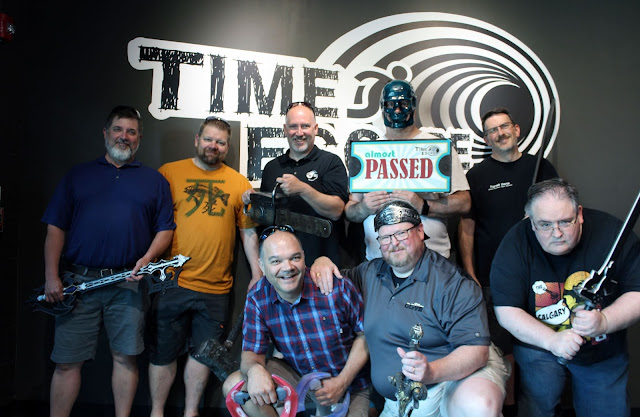 Each G&G features an outing of some kind; this year, we ventured into one of Edmonton's many escape rooms. Our mission was to escape a space station filled with alien artifacts. Another 45 seconds and we would have made it, and I have to take a lot of the blame - I had the caps lock key off when it should have been on when entering the final codes. 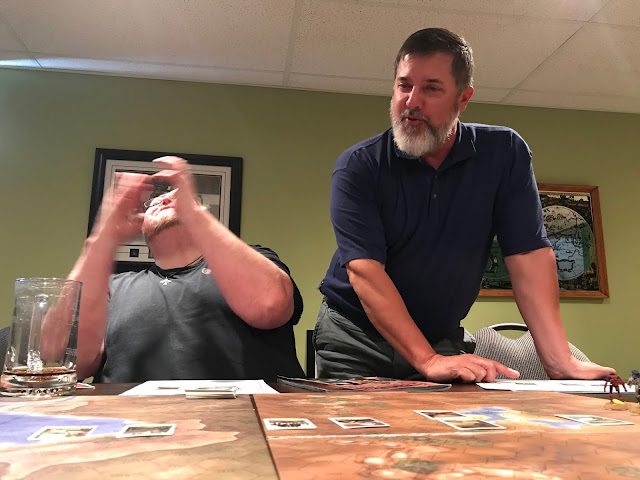 We returned to our home base for round of Timelines to start... 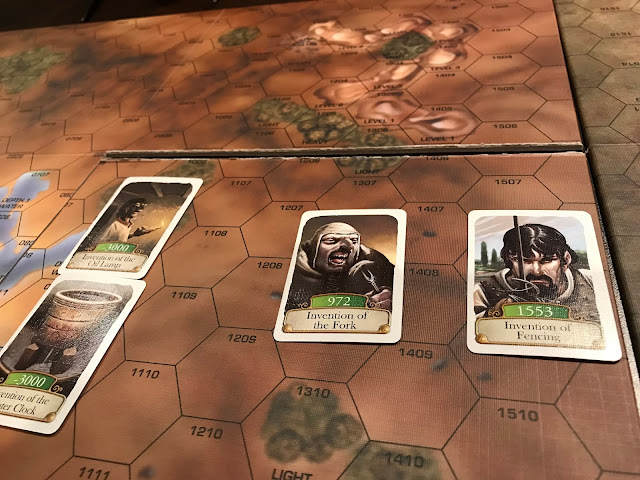 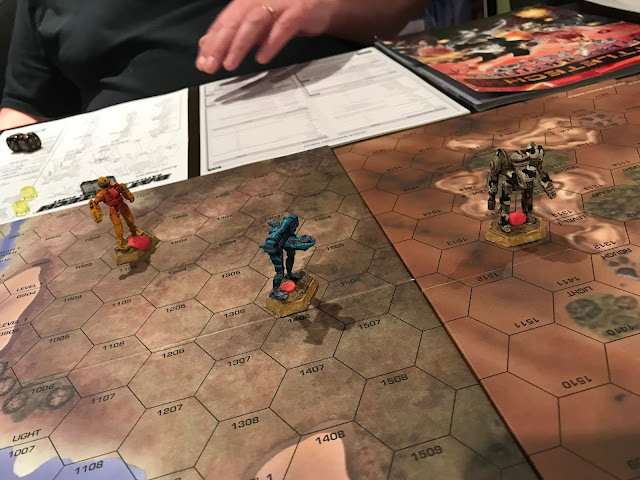 ...and then returned to a long-absent favourite, Battletech. My side got massacred! 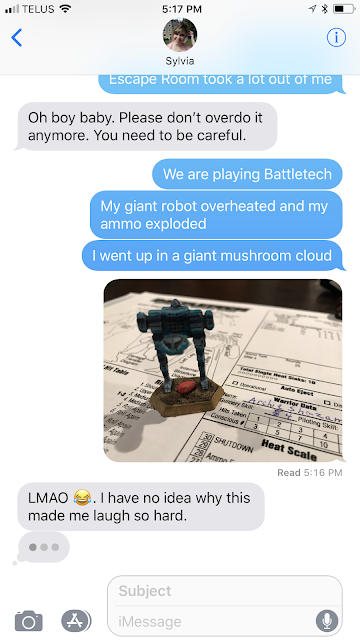 This text says it all. (Sylvia's concern above stems from my fight with a bout of double pneumonia that coincided with G&G.) 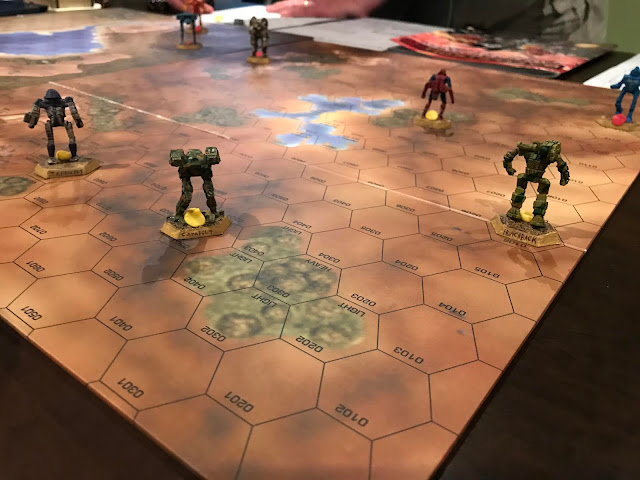 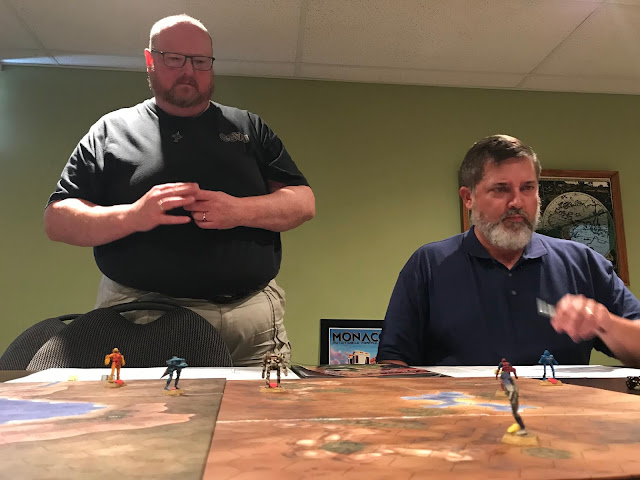 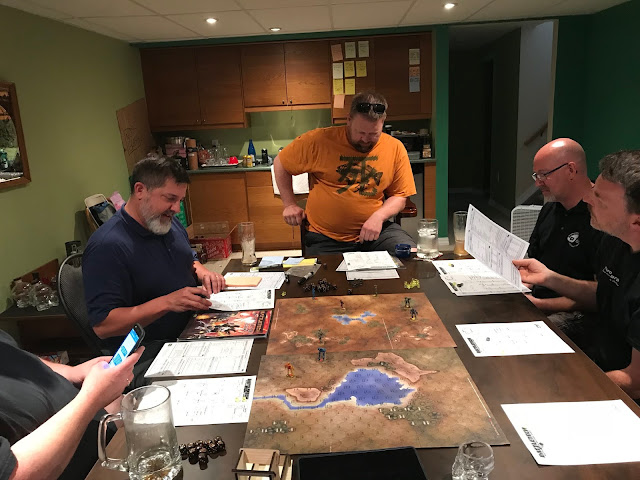 Even though I'd last played Battletech five or six years ago, and before that at least a decade and a half, the rules came back to me quite smoothly. They're really quite elegant. 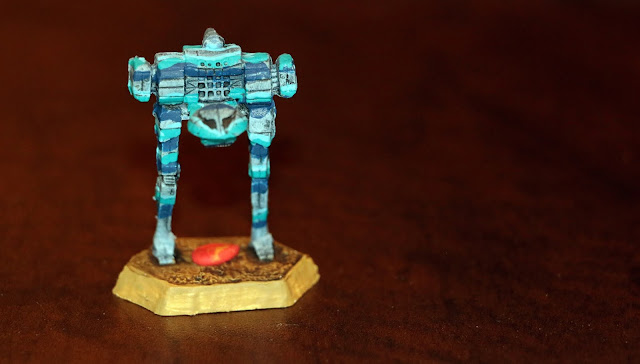 My defeated mech. I had a pretty good plan - charge headlong at the enemy, unload my weapons, then jump into a lake to cool off and evade return fire - but, as seen in the text message above, the dice were not kind and my ammo exploded. 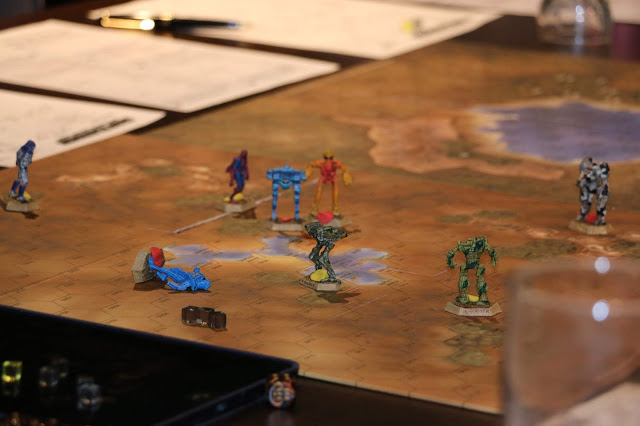 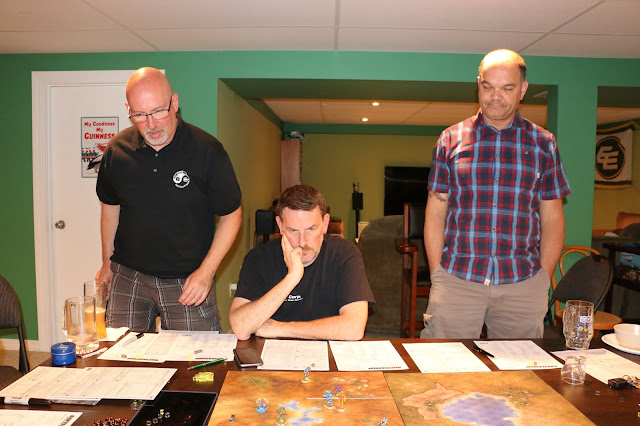 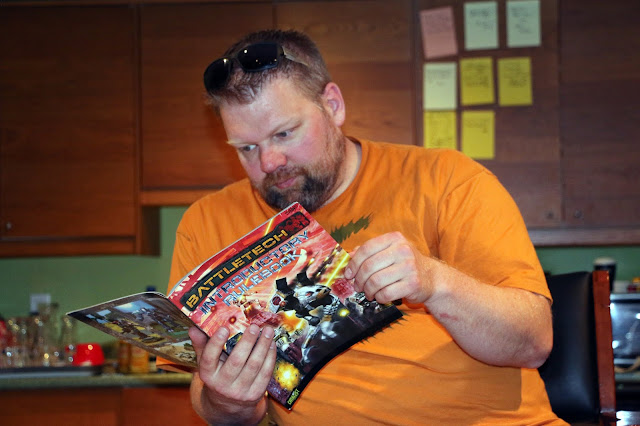 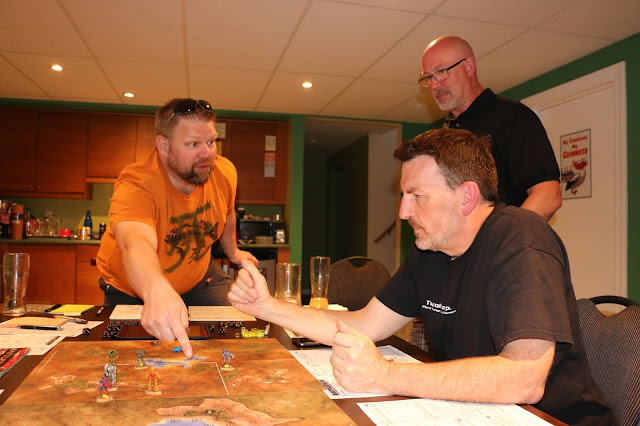 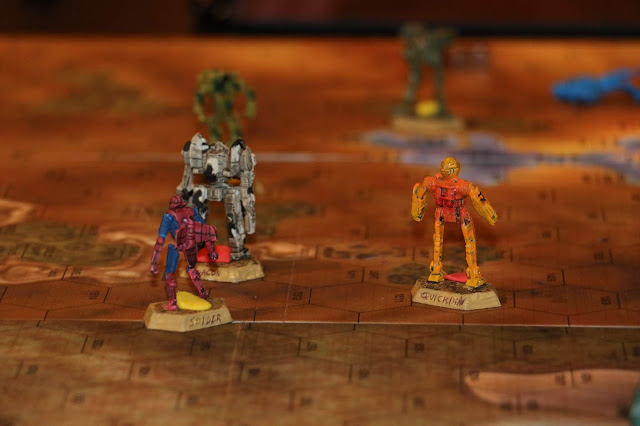 Steve painted these. I love the Spider-Man-themed mech. 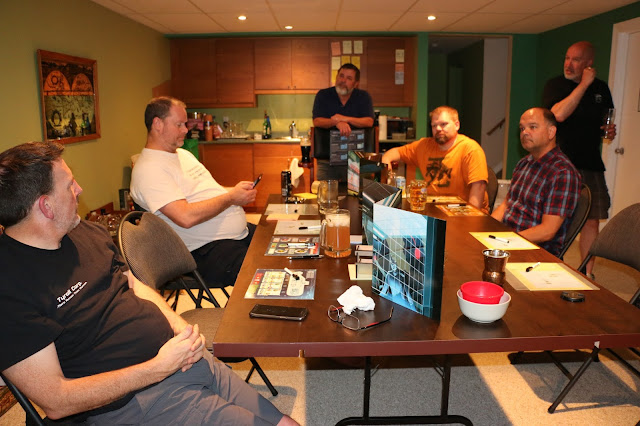 Next up was another new game for G&G, Captain Sonar. Teams of four operate two opposing submarines, with each player serving as captain, first officer, radio operator, and engineer. Players must cooperate to hunt down the enemy sub - before the enemy sub does the same to you. I think of it as "fancy Battleship." 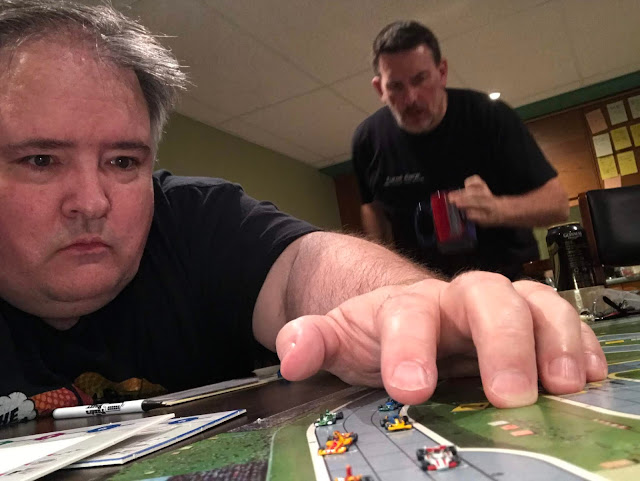 We finished off the evening with Formula De, a familiar staple at G&G. 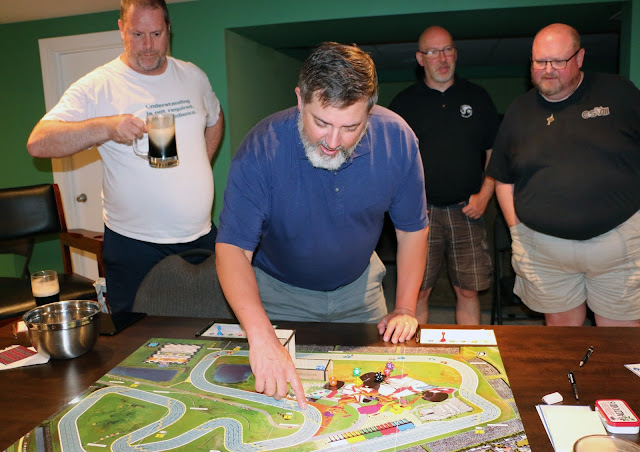 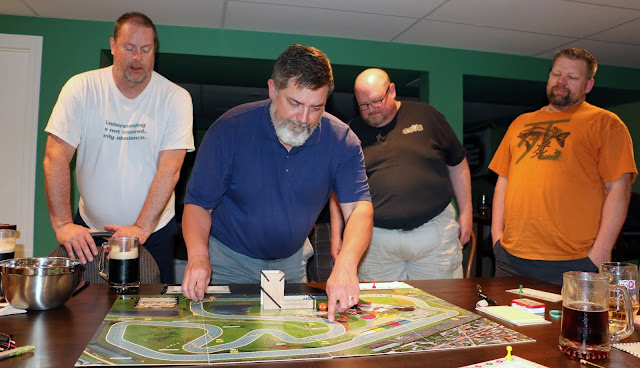 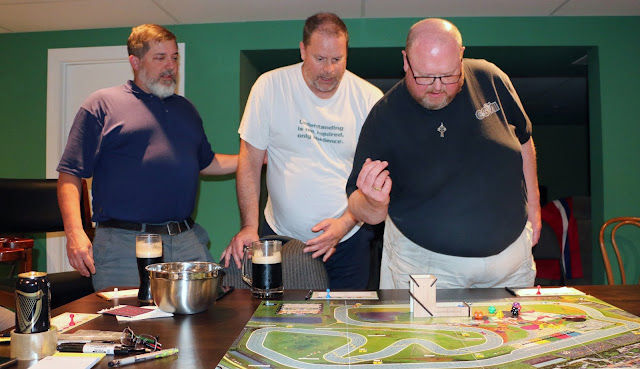 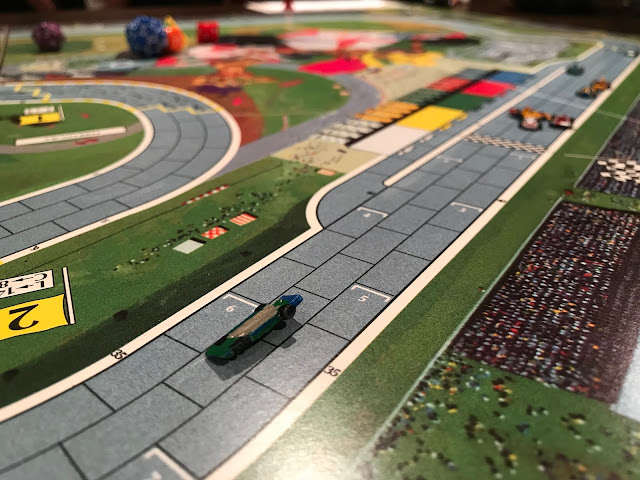 Who won? The answer will have to wait until my next post, for the race wasn't finished until after midnight, consigning the result to Day Four.
Posted by Earl J. Woods at 6:19 pm