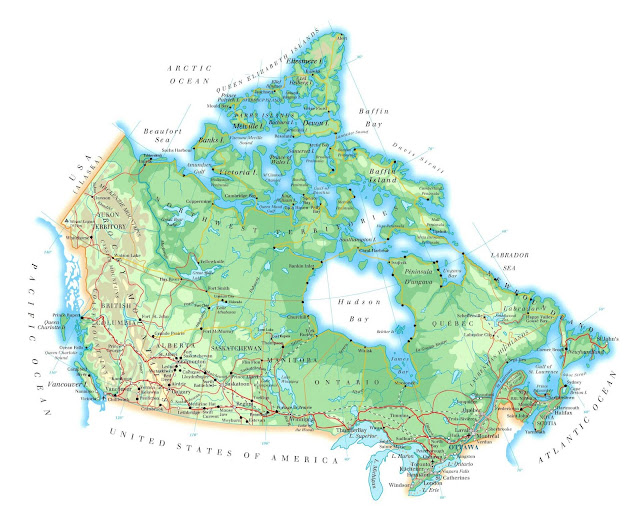 CLICK TO EMBIGGEN this custom map depicting the insane future world of PROJECT AURORA FRONTIER, in which I, Earl J. Woods, as Minister of Transportation, decide that the people of Canada's north have been tragically underserved when it comes to accessibility to the rest of the nation. The red lines on the map are existing major highways. The yellow lines are the ones I propose to build in this brave new world. As you can see, I've build roads to connect every municipality in Canada's north to the more populous regions of the south. So congratulations, men and women of CFB Alert - you can now drive all the way to London, Ontario, should you desire, and vice-versa.

A little research shows that the recently-opened 137-km highway from Inuvik to Tuktoyuktuk cost $300,000,000, which leads me to believe that it costs about $100,000,000 per 46 km of highway in Canada's north. Now, I'm not going to pretend that my attempt to use the length the line from Inuvik to Tuktoyuktuk to create a scale and see the length of the yellow lines I'd drawn is anywhere near accurate, but by my quick estimation, the highway system I propose is at least 1,000 times the size of the Inuvik-Tuktoyuktuk span. Not to mention the fact that I have bridges built across the top of Hudson Bay, the Cabot Strait, etc.

I'm guessing that this project might cost at least $500 trillion dollars. That compares to a mere $144 billion for the entire Apollo program. Indeed, apparently the wealth of every person in the world only adds up to $241 trillion.