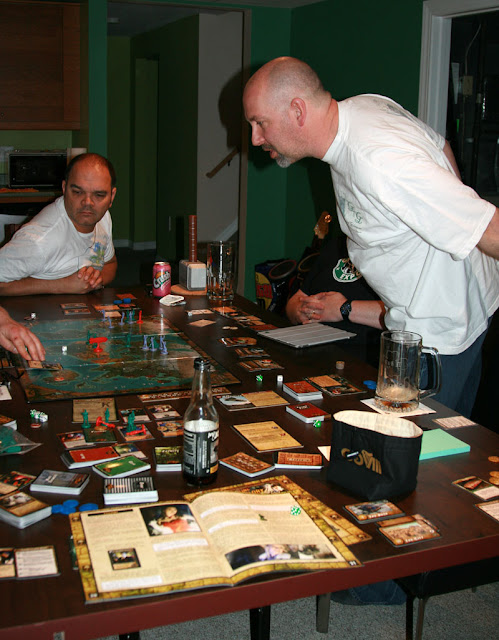 Saturday began with Fortune & Glory, a game that casts players in the roles of 1930s Republic serial heroes, cooperating to stop either the Mob or the Nazis from casting the world into darkness. 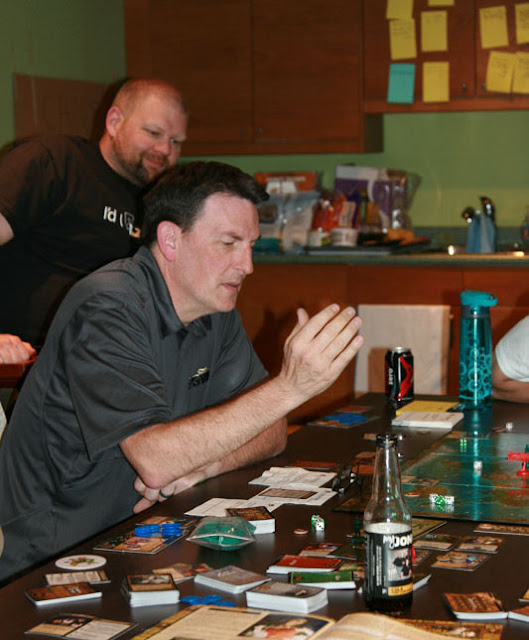 With a full complement of eight players our game took forever, though unfamiliarity with the rules was partly to blame. In the end we halved the game goals for both sides (Nazis and fortune hunters) just so we could finish the game without cutting into Circvs Maximvs time. 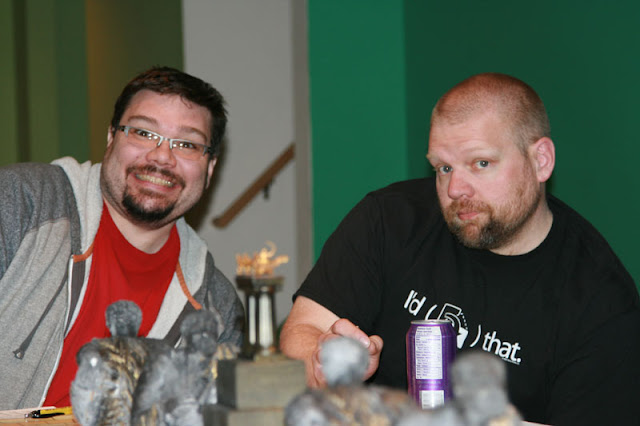 Circvs Maximvs is, of course, the epic game of Roman chariot racing, and the closing marquee game of G&G. For the first time this year we had nine racers, thanks to the sudden arrival of Scott's older brother Dustin (left). 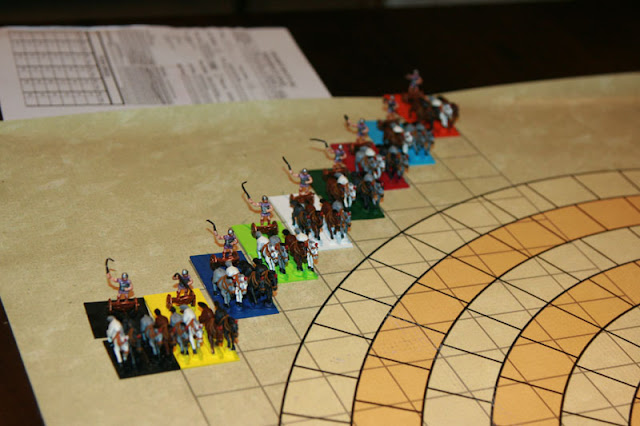 Jeff had already won the coveted Caesar's Cup twice in a row, only to have Pete steal his laurel wreath last year. Jeff  was champing at the bit to reclaim his crown, while Pete was eager to match Jeff's back-to-back victories. But what of the other hungry gladiators on the field? Every racer hungered for victory. 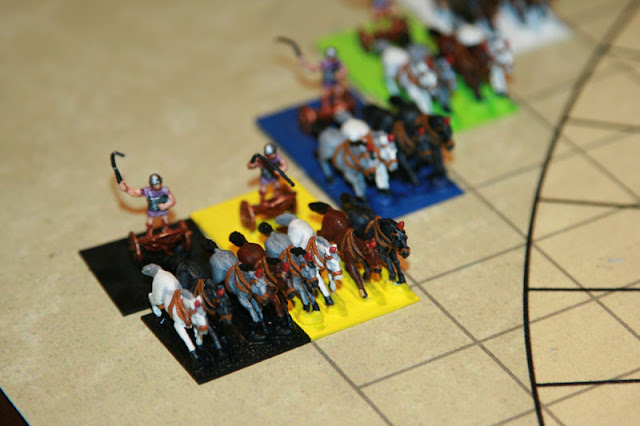 My team, on black bases, began the race next to Mike Totman's yellow-based team. I enjoyed an excellent start, whipping my horses into a frenzy to overcome inertia flawlessly. But my opening luck was not to last. 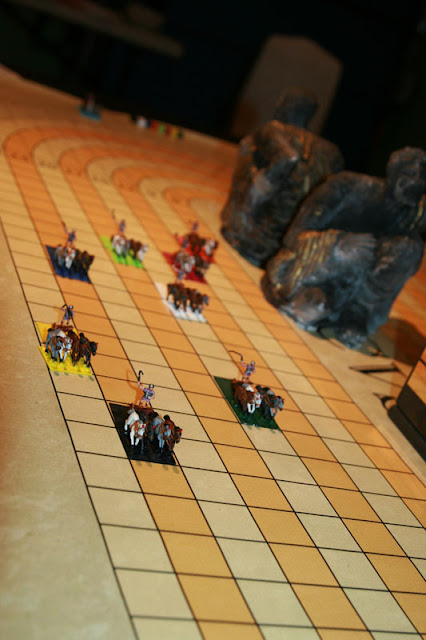 Yes, for one brief, shining moment, I held the lead. The crowd roared! 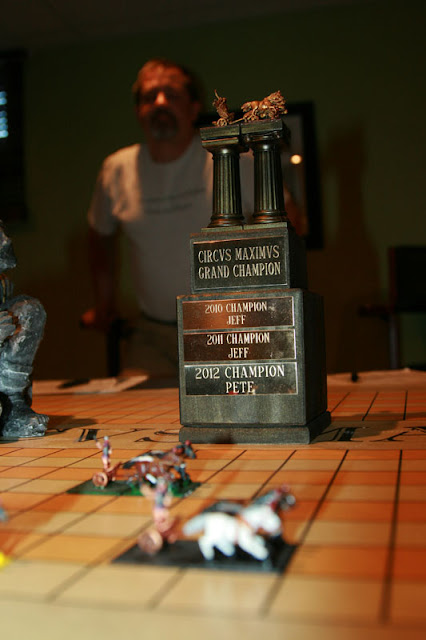 Thundering hooves kicked up great clouds of fine Roman earth as we raced past the enormous edifice replicating the cup. 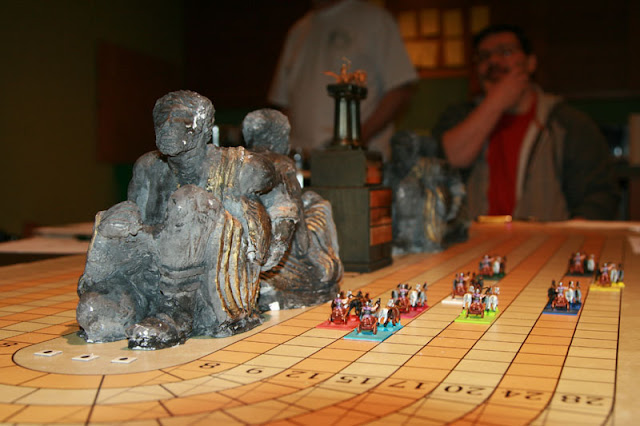 But even now the vile Brothers Friel were plotting against me, and against all their fleet-footed betters. Note Dustin's Machiavellian stroking of his Mirror Universe goatee. 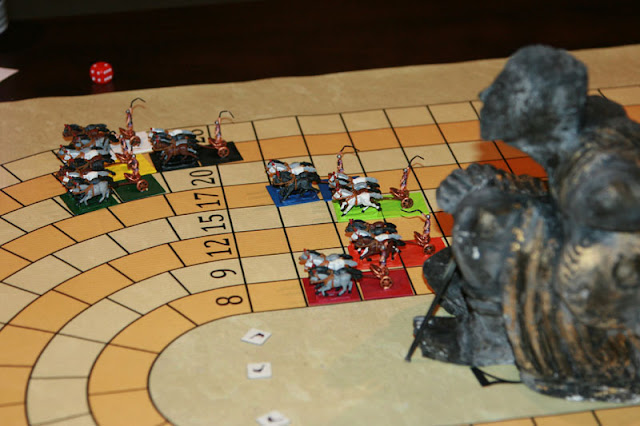 Dustin (white team) and Scott (orange team) lashed out with their whips at rival horses and charioteers, their vile calumny raising bloodthirsty cheers from the stadium throngs. "Are you not entertained?" the Friels cried. 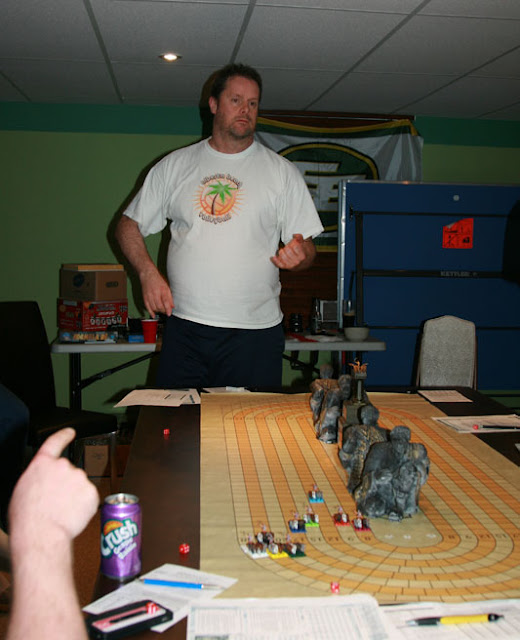 Their bloodlust even infected Mike Totman, who attempted to whip my charioteer in passing. But my man was too quick, and snatched Mike's whip away, disarming the rival racer. 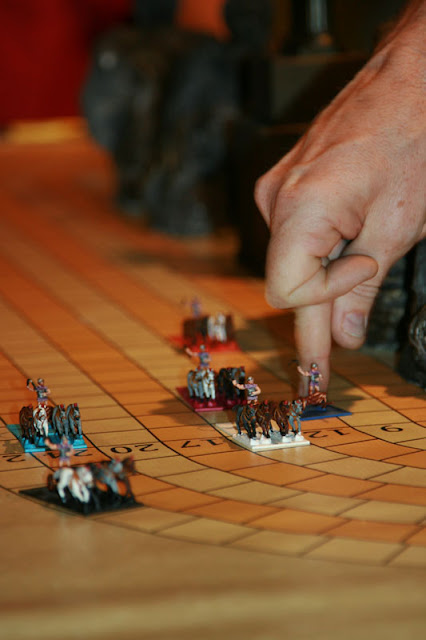 With half the racers getting into whip fights, former champions Jeff (light blue) and Pete (fuschia) focussed merely on circling the track as quickly as possible. Here, Rob moves his charioteer into position (in Circvs Maximvs, you move your horses first, then follow with the chariot; this makes it easier to keep track of your moves). 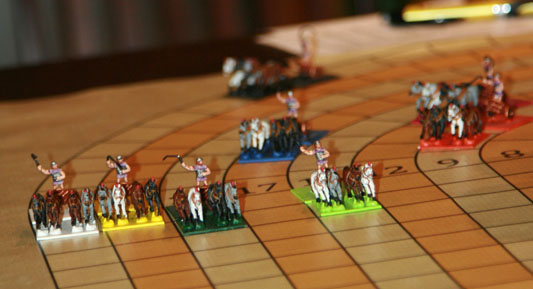 At the halfway point, it was still anyone's race. 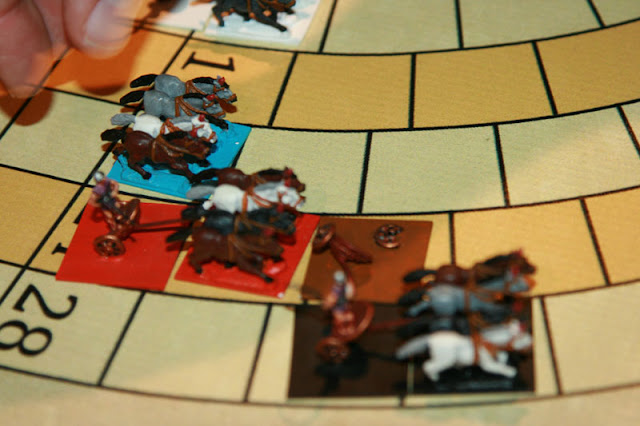 And then, vile villainy. Scott whipped Jeff's horses into a frenzy, causing his chariot to flip. I narrowly avoided the wreckage, while Scott simply, callously, drove atop it. 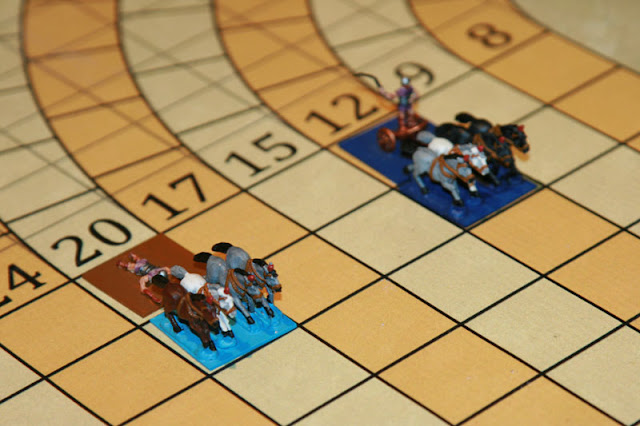 Jeff's racer was dragged by the reins through the dirt, his body taking incredible punishment as Island Mike's racer looked on in horror. 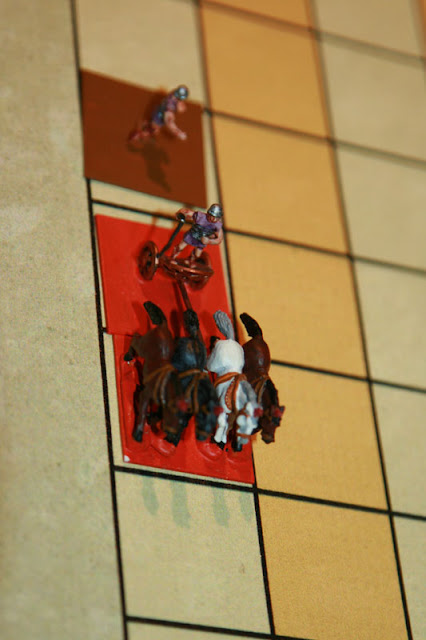 Fortunately Jeff was nimble enough to untangle himself from the reins and make a break for the safety of the stadium. He escaped, narrowly dodging Scott's attempt to trample his fleeing form. 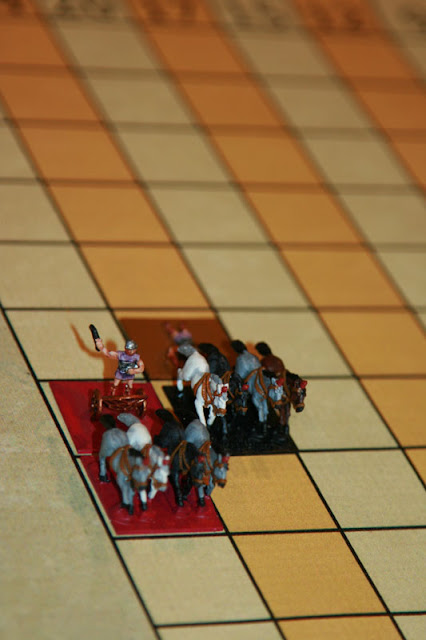 In the final turn I made a fatal error, misjudging my speed and flipping my chariot. Now it was my turn to be dragged through the dust. But I refused to release the reins, reasoning that this close to the finish line I still had a chance of at least reaching the podium. Here I am, right on Pete's tail. 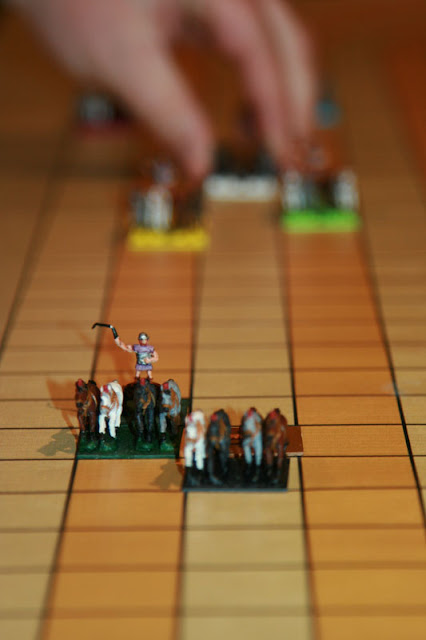 But from behind, the hand of fickle Fate (or, more accurately, fickle Friel) loomed, moving his pale white horses into position. 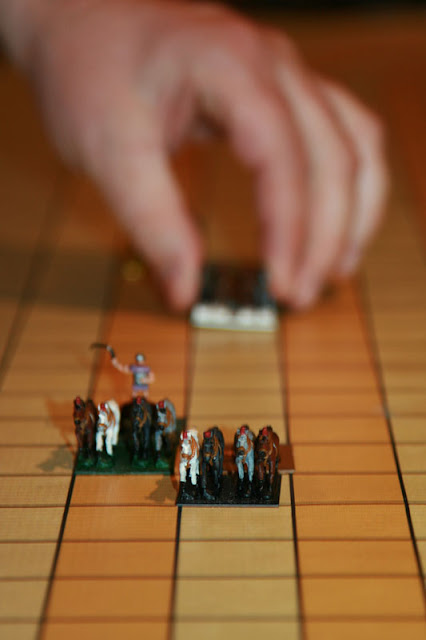 On a pale horse the reaper came... 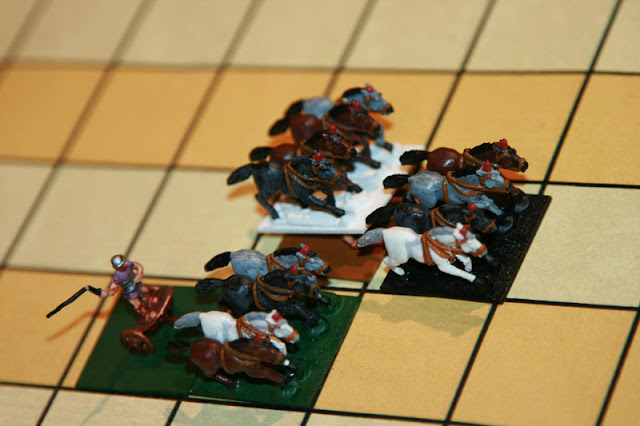 "AAIIIEEE!" wailed my driver as Dustin's horses trampled him to death. 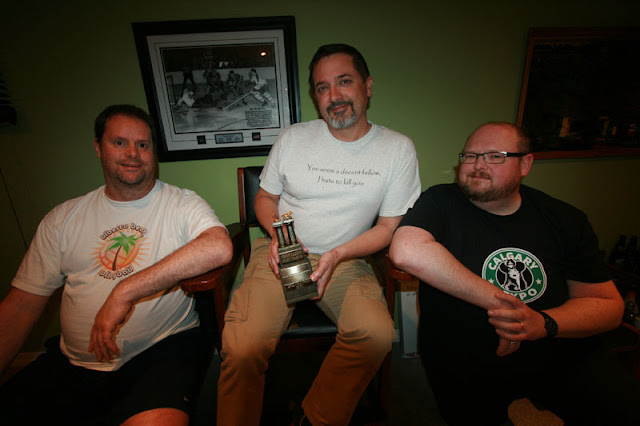 I wasn't the only casualty. Right after Dustin trampled me, Scott whipped Rob, causing Rob to flip. And then Scott casually trampled Rob to death just as his brother had killed my hapless racer. This gory finish almost eclipsed the greater accomplishments of the victor, Island Mike himself, new champion! Mike Totman and Stephen Fitzpatrick followed right on his heels, followed by Pete, Dustin and Scott. Only one question remained: how would Mike transport the fragile statue back to Vancouver Island..?
Posted by Earl J. Woods at 12:13 pm

Sorry to hear that some drivers suffered from hoof in mouth disease, but that's racing.