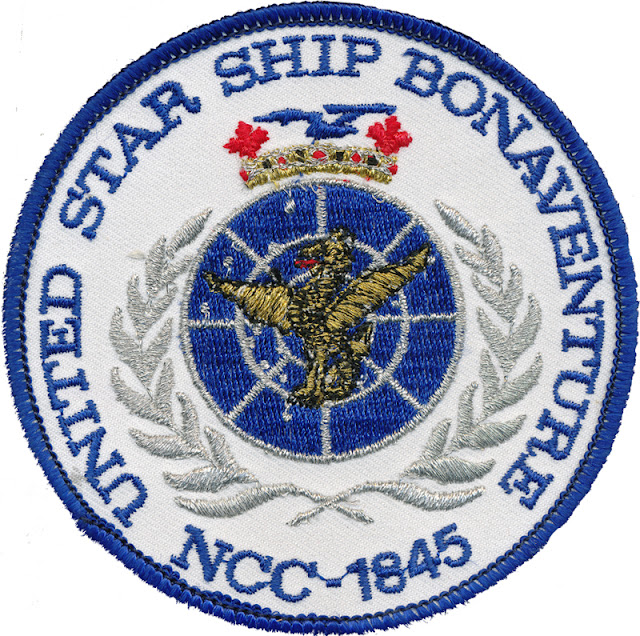 Since Star Trek Into Darkness gets its wide release today, this seems like an opportune time to mention my brief membership in the Edmonton Star Trek Society. In October 1987, a month into my first year at the University of Alberta, I stumbled across a meeting of the Society in one of the large lecture theatres in the Humanities building. Just as I arrived a young man sitting at the very top of the lecture hall carelessly tossed a soda can down to the first row, where it bounced painfully off the innocent skull of a Star Trek fan and model builder I'd later come to know as Barry Yoner. This seemed like my kind of place, so I joined the club and a couple of years later later became the second or third President of the spinoff University of Alberta Star Trek Club.

Before that happened, though, there were some fun times on the Bonaventure, the Society's imaginary starship. We once constructed a bridge and shot a short film based on the then-new Star Trek: The Next Generation. Ron Briscoe played Captain Picard by wearing a flesh-toned bowl on his head, and I think Tony Longworth played Commander Riker. I played myself, Ensign Woods, at the navigation station, drinking Coke while on duty as an in-joke reference to...oh boy, here's where it gets complicated. Let's just say that Star Trek fandom and a nascent Internet sometimes combined in very absurd ways.

I don't remember who designed this very handsome USS Bonaventure patch, but I think the design and execution still hold up very nicely.
Posted by Earl J. Woods at 11:03 am