The Eyes of Bruce Lee Game 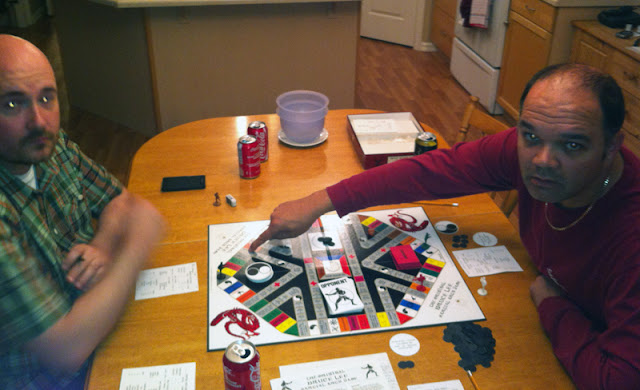 On Saturday night Sean and I went to visit Jeff and his son Connor to play a couple of board games. We started off with Dominion, a well-designed card game of kingdom-building, which I won by a single point. The real highlight of the evening for me, though, was Bruce Lee Game!, the chaotic and violent game of martial arts.

I picked up Bruce Lee Game! shortly after Steve Fitzpatrick introduced me to it, way back in high school. I'm glad I bought it back then, because the game commands steep prices on the used market; it's long out of print.

The object of Bruce Lee Game! is to travel the streets of Chinatown, building experience, learning martial arts forms and buying weapons so that you can enter the dreaded Labyrinth and fight your way to confront the evil (?) Grand Master at its centre. Street fights, tournaments and assassination complicate matters, as do injuries.

In all honesty, the combat game mechanic in Bruce Lee Game! should probably be considered broken; every time someone rolls a one on a ten-sided dice in combat, you injure yourself and wind up in the hospital. Considering each player rolls the d10 three times during each fight, that's a lot of hospital trips.

Because it's so easy to wind up in traction, Jeff's early lead in the game evaporated. While he recuperated, Sean and I finished our training and followed him into the Labyrinth. If you're injured in the Labyrinth, of course, you wind up in the hospital and have to start all over again. Each of us fought the Grand Master multiple times, only to face bitter defeat in single combat or the greater humiliation of yet another trip to the hospital.

In the end, Jeff defeated the Grand Master on his eleventh attempt. If our game play Saturday night were somehow transformed into a Kung Fu movie, it would have to take the form of a farce. On the other hand, I giggled all night long...