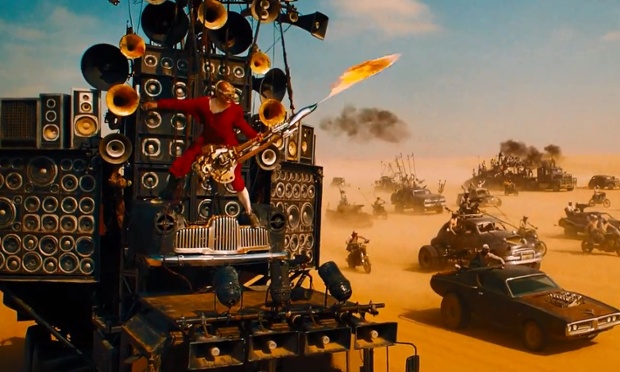 Our species' hold on civilization is tenuous. On some level, every human being knows we live on the edge of disaster, but we carry on regardless, for it seems there's little any one person can do to forestall it. The Cold War may be over, but it's still possible that nuclear fire could rain down on our heads, and even if that never happens, there is still climate change, resource depletion, disease. The Fermi Paradox hints that few civilizations last; we may very well be doomed.

And yet we fight. Every day, millions of idealists toil for a better world, sacrificing lives of comfort and ease in order that they may help build a brighter tomorrow. And great artists, meanwhile, remind the rest of us how eagerly we drive, at breakneck speed, toward catastrophe.

George Miller is such an artist. Since 1979, when the first of his apocalyptic Mad Max movies was released, the Australian director has, over the course of four films, created a war-torn landscape of oil-starved, bloodthirsty savages at war with the tattered remnants of civilization. Miller's vision reaches its apex in the magnificent Mad Max: Fury Road.

The plot is simple. Mad Max, a lone road warrior haunted by the deaths of those he loves and his entire fallen civilization, is ambushed by a pack of car-worshipping cultists and turned into a "Blood Bag," a source of fuel for the radiation-diseased maniacs. He is ultimately, though incidentally, rescued by Furiosa, a former disciple of the cult leader, Immortan Joe; her mission now is to rescue a small group of women from Immortan Joe's clutches. A frenetic car chase begins, a long action sequence with only brief but critical pauses, followed by a final confrontation and the hope of not only redemption, but reclamation of what little good is left of the world.

A plot synopsis cannot do justice to Miller's richly textured world. The characters inhabit a landscape blasted to bare sand and rock by nuclear fire, a place where little grows, where pathetic wretches scrabble for poisoned water in dank swamps. Immortan Joe's followers and slaves live in one of the rare oases of relative beauty and wealth; they have access to fresh water and even grow crops. The elites of this damaged society are bleached pale, living "half lives" of slow radiation poisoning, bald, thin, lips chapped; they look like skeletons. They worship the chrome, symbolic of the heavily tricked-out cars they drive, spray-painting their lips silver before going into battle or performing a particularly dangerous stunt; each driver has his own Wheel, which he carries to his vehicle and snaps into place before driving off.

In the shattered, diseased world they inhabit, Immortan Joe and his crew chase the perfection of humans unblemished by radiation poisoning; they jealously hoard the few undiseased women, breeding them in the hopes of raising a generation untouched by mutation. But it rarely happens, and when one henchman's mouthless son is born and dies on the road, he cries out defiantly to the other road warriors:

How many other screen villains are portrayed with this level of sympathy or understanding? Mad Max and Furiosa and their band of women are unquestionably the heroes of the film, but their struggles are all the more compelling because the villains they face have genuine, heartfelt motivations that anyone could understand. Yes, they're barbaric; yes, they enslave people; yes, they murder. But after the apocalypse, what choice do they have?

There's a brief respite in the long chase sequence. Max, Furiosa and the freed slaves encounter Furiosa's old family, a group of aging, kickass women. Resting by starlight, they watch as a satellite passes overhead. One of the elders points and explains what the satellite was for. I paraphrase:

"Back in the time of plenty, there was no war, there was no hunger. They just relaxed and watched their shows. Everybody had a show."

More than any other scene, this moment illustrates why Fury Road is an important film, because it shows us, in the starkest possible terms, how lucky we are and how much we have to lose. The great tragedy here is how the elder misinterprets or misremembers the past; we do indeed live in a time of plenty, and there should be no war and no hunger. But there is, because we are foolish and wasteful, fearful and selfish, and that's why we stand to lose it all, to stumble blindly into the abyss, into a world very much like the one Miller envisions.

It's delightful that this is a film driven by women. They have agency; they take the initiative, moving the plot forward, making the hard decisions. Mad Max himself is the catalyst for the story, but he exists almost outside it, a temporary sidekick to Furiosa and her valiant crew.

The film is also, it must be said, wildly entertaining. The action sequences are crisp, beautifully executed and edited, with incredibly imaginative setpieces enhanced by cinematography epic in scope and scale. The art direction is spectacular; the vehicles in this film are like characters themselves, particularly the rock-concert-on-wheels, a flamboyant contraption that includes massive stacks of speakers, a full percussion ensemble, and a flamethrowing electric guitar.

Max Mad: Fury Road stands so far above modern action movies that it creates a class of its own - the thinking person's blockbuster, the action message film. Long after this year's crop of "important" Oscar-bait movies is forgotten, Mad Max: Fury Road will withstand the test of time, remembered not only as a genre classic, but a film worthy of critical analysis for decades to come.

I'll be very surprised if this doesn't turn out to be the very best film of the year. It is triumphant. It is sublime. And with every gorgeous frame, it shows us how much beauty there is in the world, and how easily we could lose it all.
Posted by Earl J. Woods at 5:53 pm

I've been eagerly awaiting your impressions of this great movie; your insights are well worth the wait!

I finally got an opportunity to rewatch this movie, subsequent to your telling me how profoundly moving and significant you found it to be. I am in total accord. Seeing it again gives one a chance to really dig into some of the designs, and the cult and culture that drives the antagonists. The cynicism behind 'You will ride eternal, shiny and chrome,' contrasted to the sincerity of `witness me' has so much more significance and impact the second time around.